Immigration and refugee issues are popular in media narratives. With over 272 million international migrants - a number which has been on the rise for years - popular news media is constantly covering migration stories. Yet asking how these stories are being covered is important.

On this page, you will find details about our research, some featured immigrant and refugee stories, and a closing reflection.  First, you will find more details about our research and findings in the accordion menu below. Our research involved a discourse analysis of 563 articles from CNN and FoxNews from 2013 through 2017. We present a summary of the trends as well as main findings from our analyses of CNN and FoxNews separately. We have also included a section with more details on our research methods for those who might be interested. Throughout the research, one thing we found most striking was the relative absence of immigrant and refugee voices in the stories about immigrants and refugees. We therefore decided to juxtapose the findings from our discourse analysis with examples of immigrant and refugee stories, which you will also find on this page. We have highlighted these examples, which link to other organizations and platforms where you can learn more. Finally, we close with some reflections and invite you to continue to think about these issues with us.
Summarizing the Trends
We analyzed a total of 563 articles from CNN and FoxNews, which were published over a five-year period, from from 2013 through 2017. The articles underwent a double review, with one team member reading through and coding the articles for dominant theme(s) or frames, and then another repeating the process without knowing how the first team member had coded the article. Matching frames were finalized, and frames that did not matched were discussed and reconciled as a team (to see more details about our research methods, see the last section of the accordion menu). The team first engaged in open coding until we had a set or recurring themes that we were using. We then fleshed out definitions for each of the frames, which are listed below. Some articles were assigned two frames if the team felt that two frames were equally or near equally present.
For our 563 articles we had a total of 694 frames assigned. The percentage distribution among our 15 frames is shown in the chart below. 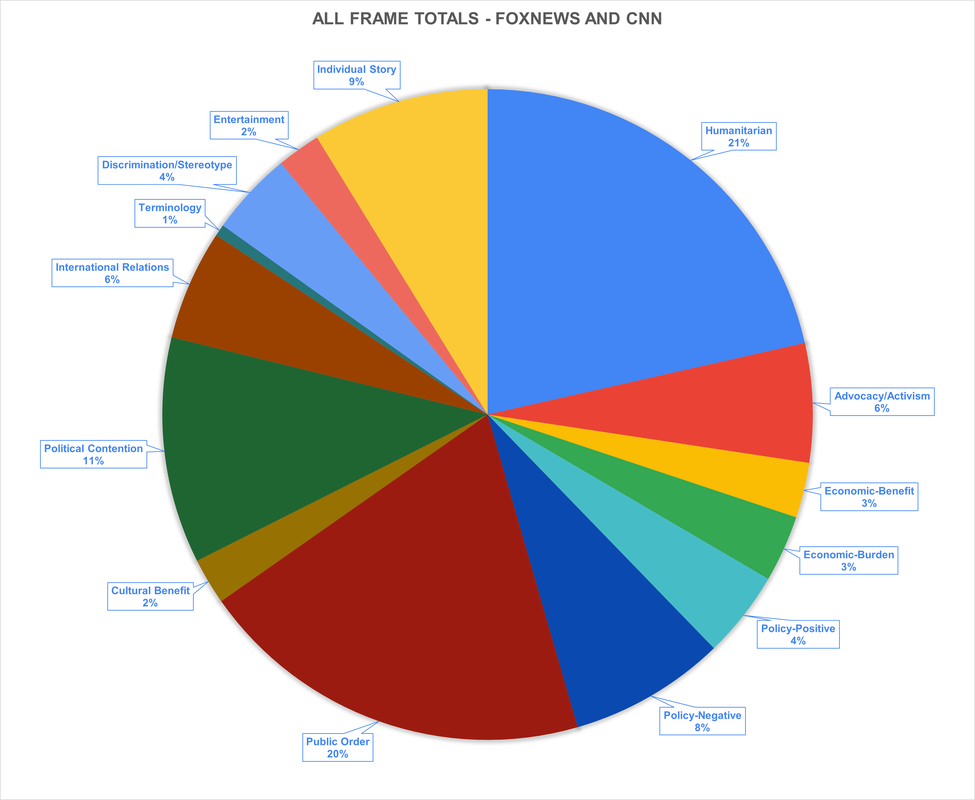 Worth noting is that, while individual stories does make up a considerable percent, most articles were assigned the "individual stories" frame as a secondary frame. That is to say that usually another frame was dominant and it just so happened that the article was featuring an individual. Only a small number of articles were labeled exclusively as "individual stories" and portrayed an individual's story in a multidimensional and fully human way.
Interestingly, when frames were collapsed into more "positive leaning" frames such as those which discuss immigrant and refugee issues and communities in terms of their economic or cultural benefit, and into more "negative" leaning frames such as those which discuss these issues in terms of public order, security, and control, we can see how polarized the narratives in mainstream media really are. We considered the following frames to be generally more positive leaning: humanitarian, advocacy/activism, economic-benefit, policy-positive, cultural benefit, and individual story. We considered these frames to be generally more negative leaning: economic-burden, policy-negative, public order, political contention, discrimination/stereotype. The frames policy, international relations, terminology, and entertainment were considered more "neutral." Of the 694 total frames, 316 were then "positive leaning," while 321 were "negative leaning." 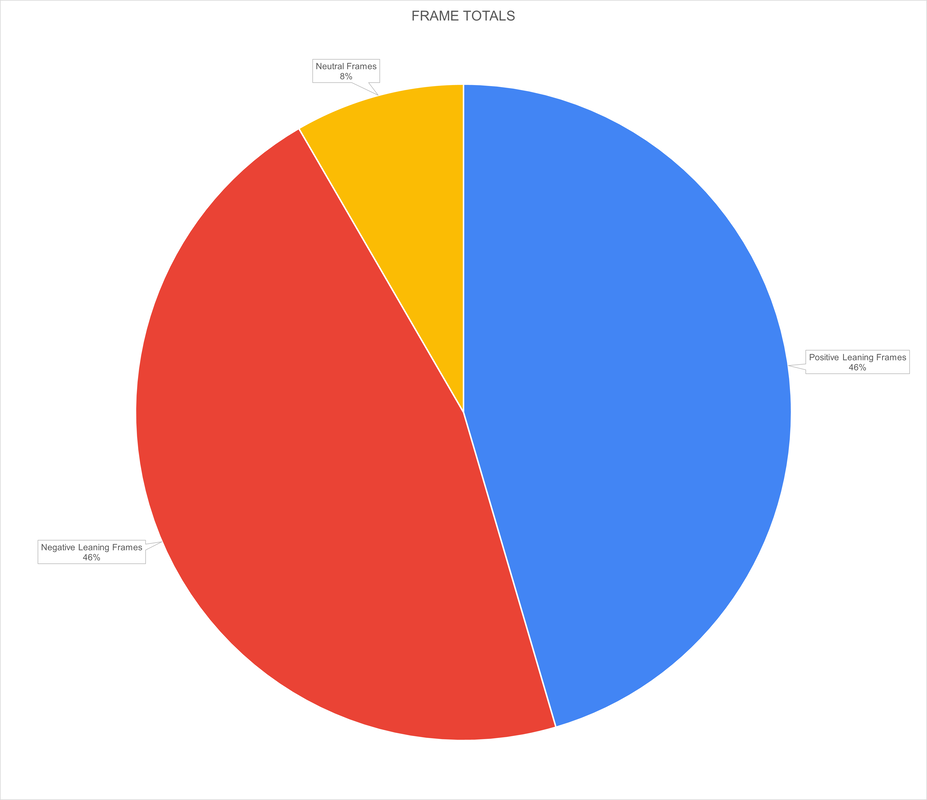 FRAME Definitions
In our research, we used the following frames to label the articles we coded. When we began coding, we used open coding and eventually came up with a set of themes that were recurring throughout the coding process.
Fox News 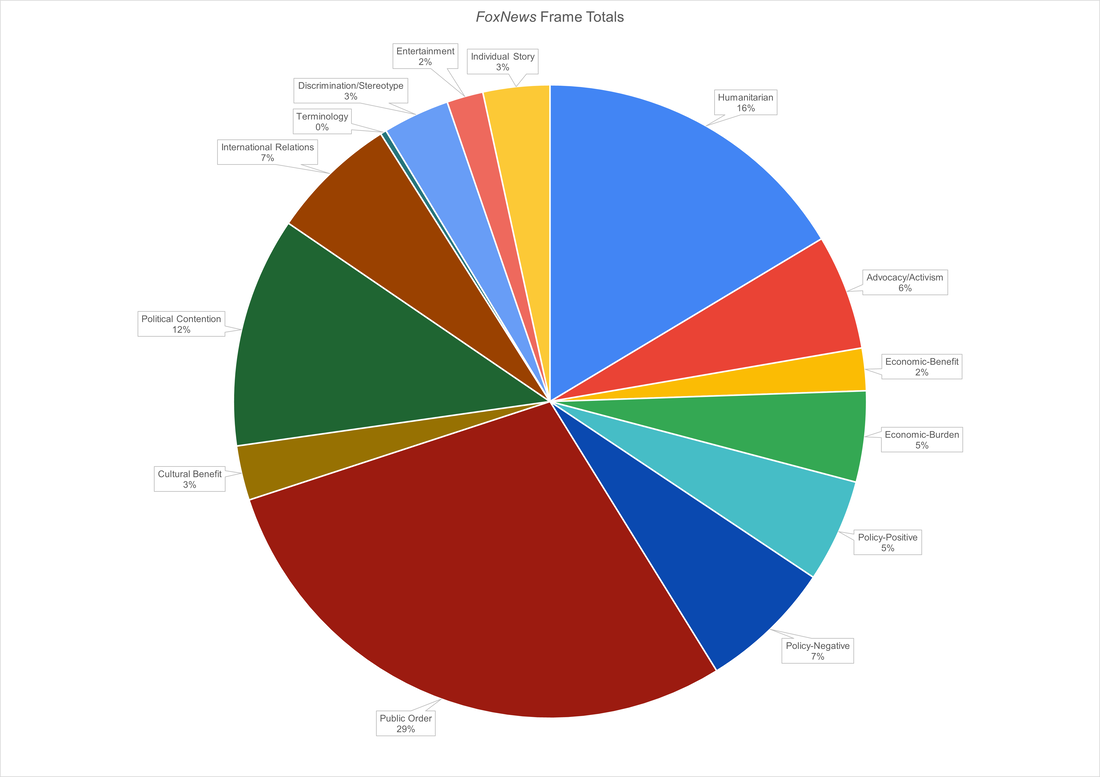 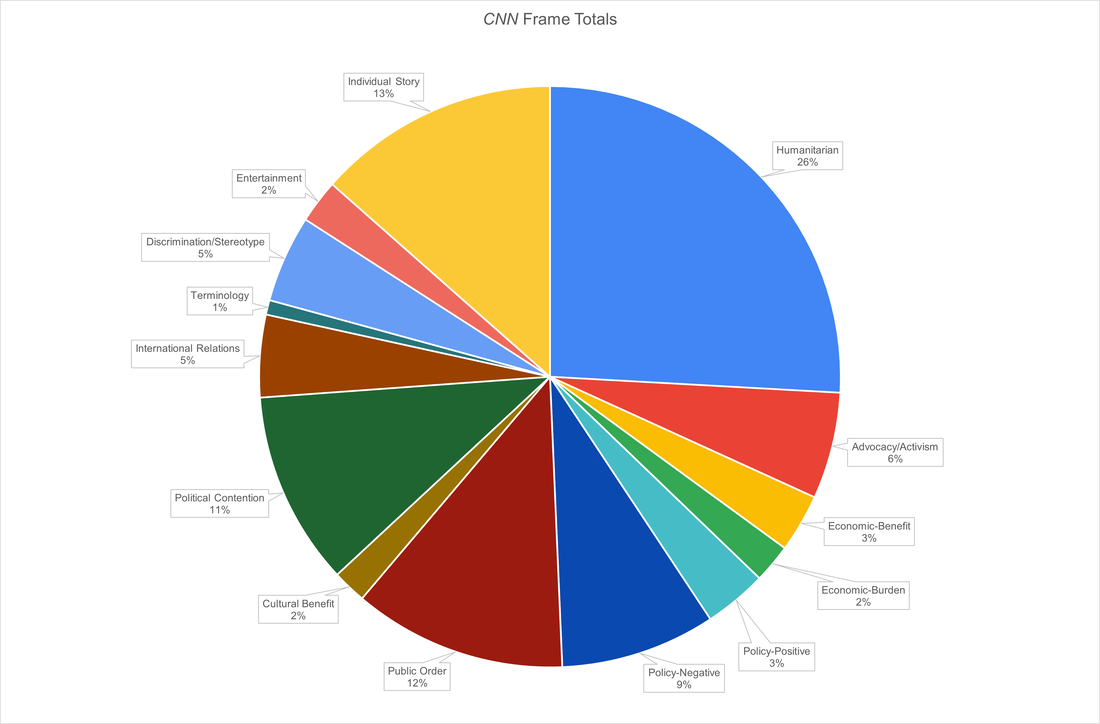 SIDE BY SIDE
MORE ON OUR METHODS...

What does this all mean?

Final thoughts/questions to leave the reader with
Proudly powered by Weebly
Icons by https://icons8.com/